Available in the App Store

An innovative and unique puzzle game that owns the touch screen through it’s simple gesture mechanics.

Firstly, I want to begin by saying I absolutely hate spiders. This game was on sale and it sounded like an interesting puzzle game so I thought I would check it out. When I started a new game and it zoomed in on the spider… I will admit that I was momentarily freaked out. Very sad, I know. As I played the game a bit longer, I found it to be rather enjoyable and an interesting challenge. Now I can’t put it down!

Spider has received critical acclaim from practically every corner of the Earth, including getting our own Game of the Year 2009 nod as well as a similar nod from Apple themselves that year. – TouchArcade 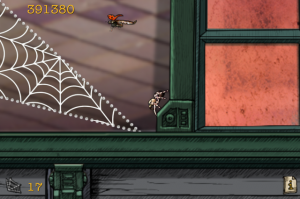 To describe a bit more about the game, it is a puzzle game for iOS that really owns the touch screen. It requires the player to hold their finger in the direction they want the spider to move, flick at different speeds for different velocity jumps, tap the spider to plant a web and then flick in a direction to spin it. Spider uses gestures exceptionally well, especially since the game was released right at the entry point of touch screen games in 2009. 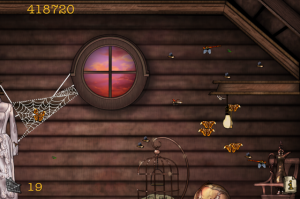 Zoomed out to see where the majority of insects are

The goal of the game is pretty straight forward. Spin webs in geometric shapes (which fill in automatically) so bugs are caught, the spider gets to eat, and the player gets to move onto the next area of the house through a portal. However, the spider does have a limited number of webs, which adds an additional layer of difficulty. Players must plan out where they want to lay their webs otherwise, they’re stuck and have to restart the level. Webs are obtained by eating insects, with different insects giving different amounts.

To go back to how I downloaded the game for free, according to TouchArcade, this was the first time EVER that Spider has been on sale, let alone free, since it’s release in 2009. I feel lucky to have discovered this as such a time and hope that all of you have a chance to download it and check it out for yourselves.

Check out the video below:

Studies have even been utilized for people and conditions